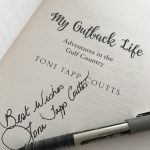 I keep promising myself that I will do a blog at least every fortnight – I am a semi retired lady of 61 and full time author – RIGHT! So you should be able to prioritise your time!  Well here I am six months later!

I was well prepared to be a ‘one book wonder’ with my first memoir ‘A Sunburnt Childhood’ published in 2016 so I hadn’t really considered that 12 months later I would have another book hit the stores across Australia and before I knew it – launch day in March arrived, for ‘My Outback Life.’

A book launch in Darwin on the 30th saw about 30 people turn up and listen to my conversation with the much loved retired ABC journalist Julia Christensen, a women of great intelligence and perception.

Then off on a whirlwind trip to Brisbane, The Sunshine Coast, Maleny and Toowoomba for signings and meeting the staff at a range of book stores.  I was chauffeured by the South Queensland sales manager, Adele.  The night in Maleny was a highlight at Rosetta Books owned by Anne Brown. I talked to a cosy group of about 10 people and then spent the night in a gorgeous bed and breakfast after a dinner of too much food and too much wine!

A highlight of the trip was meeting up with two of the people who feature in my book, Maree Crawford whose  young son had a very serious heart condition at the time, and how the community came out in force to fundraise for her son’s heart operation in the early 1990’s.  Another was Narelle Rowden who lived at McArthur River Station with her husband Ron who was the truck driver, and their little girl Anita. Narelle and I became good friends and we had our baby girls within in a month of each other in 1990. Despite them moving back to Queensland and us moving further north in the NT, we have remained friends over the past 20 years and it was great when Narelle decided to come on the second leg of the trip to Toowoomba with me.

Isn’t Facebook an amazing medium? It allowed me to make contact with people whom I knew in the Gulf Country days to be able to clarify stories and catch up with old employees and friends.  I don’t know how people wrote books before Mr GOOGLE and Facebook!  Well, actually I do know how people wrote books – long hand, over and over again till they got it right, spending months or years in Libraries and researching their stories.  I have read that Tolstoy rewrote ‘War and Peace’ seven times! Is this true? I am not sure.

I would much prefer the new techno age where everything is at your fingertips!

So launch month of March 2017 came and went in a blaze of glory.  ‘My Outback Life’ is selling steadily and ‘A Sunburnt Childhood’ was reformatted to sell at $19.95 and is continuing to sell really well. “A Sunburnt Childhood’ is now in the final throes of being adapted to an upper primary children’s book and will be released end of March 2018.  So I am pretty happy about that!

I have spent the past year putting together a collection of stories for the Katherine Museum, called ‘What a Woman!’ with my friend and Museum manager Simmone Croft. This was a project that started over a cup of coffee and discussion about story gathrine and the need to tell the stories of women in this little outback town.  This evolved into a collection of 56 stories of ordinary women doing great things, the quiet achievers of our community who have contributed so much to the social and emotional welfare in the development of our town.

If you want to buy  a copy of ‘What a Woman!’ you will need to email [email protected] or follow them on Facebook and send a message.

Click here for more information about the Katherine Museum