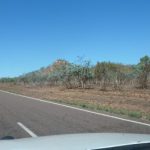 I ran into my friend/sister in law Sarah Kendall last week at the hospital when visiting my new little grandson Logan James Rain. We were talking about the book I am currently writing which is about living in the Gulf Country of the Territory. My husband Shaun and I lived at and managed the vast McArthur River Station, 580 kms southeast of Katherine near Borroloola for 14 years.

I had been thinking about do a road trip and asked Sarah if she would like to come with me.

Four days later, we were on the road. We dawdled down the Stuart Highway, popping in to have a cup of coffee with friends Jane and Wade Eastburn at Sturt Downs and then on Daly Water Hi Way Inn, 300kms south.

Fuelling up for the next leg to Heartbreak we met with Hazel Shadforth from Borroloola – I don’t think I have seen her for 15 years so we joined them for a sandwich on the front deck. The Shadforth family own ‘Seven Emus’ Station, one of the very few stations owned outright by an indigenous family in the NT. The patriarch Willie Shadforth (dec) was an amazing character with a great vision for his family.

After a good blast from the past and catching up on family news set off on to the Carpentaria Highway to Heartbreak Hotel, calling into Amungee Mungee Station to say hello to the owners – whom we discovered had left many years ago and it was now owned by a young couple. This property is located on the Beetaloo Basin where there is exploration for the controversial Shale Gas – Fracking.

First stop overnight was Heartbreak Hotel –nestled on the corner of The Carpentaria Highway and the Beef Road that takes you through the Barkly Tablelands.

Yes – it is called Heartbreak Hotel – a name that was given to Cape Crawford Roadhouse by me and Chrissie Holt (dec) from Balbirini Station in about 1983, after there were a few brawls on the verandah on the then newly established roadhouse, our local watering hole.

It has changed a little. There is more accommodation and the dining room has been tidied up and air-conditioned. We talked a lot, consumed lots of wine and beer and Sarah the ultimate sales woman sold three of my books to some road workers. We staggered off to bed by 9.am, in a ‘donga’ a demountable set of eight rooms with a share bathroom. These look like they may need a little reno and upkeep!

The next morning Sarah met Wally Snelling, a friend from rodeo days. We sold another three books to the staff. Three hours later as we reminisced and caught up on the Gulf Goss, we headed off to McArthur River Station, our former home and had lunch with the current managers, Margaret and David Daniel, who replaced us as managers all those 22 years ago!

McArthur River Station is situated in the arms of the spectacular landscape of the Abner Range with red escarpments, springs and waterfalls, the most impressive being Bessie Springs, a waterfall and spring waters that cascade into a magnificent swimming canyon and then travels on into the magnificent McArthur River that flows in to the Gulf of Carpentaria. I could go on a lot more about this landscape but you can read more in my upcoming Memoir ‘My Outback Life’ due out in April 2017.

The station is a beautiful area of white fences, sweeping green laws, massive African Mahogany and Mango trees all much loved by Margie and David who treat it like their own home. After a tour of the station and meeting the staff, we had a great homegrown corn beef and salad sandwich. Before we knew it, again another few hours had gone by so we had to journey on to Borroloola, 100kms down the road.

We laughed as we remembered stories of the crazy things we got up to – having a raft race in the croc infested McArthur River of competing at the Rodeo’s and setting up the Borroloola Show. The people we met, the fights, the fun and the not so fun things.  We stayed at the Savannah Way, which has a great range of accommodation and a fabulous little restaurant/café with a great menu where we met up with long-term resident Annette Bradford. The Savannah Way has a good range of wines, unlike most roadhouses and places in the outback where you will most likely get a choice of supermarket specials,  of two reds and two whites that will cost anywhere between $20 – $40 a bottle.

Borroloola has grown but we still found our old friends Mavis and Ron Kerr, Val Seib and Neville Andrews and Indigenous man Ronnie Raggett who worked for us for many years. The stories are many and too long to tell here but a highlight was running into Angus Kidd – an Aboriginal man who worked in the stock camp for us when he was a teenager. He called out as we fuelled up – petrol $167 a litre- 22 years since I had seen him. He gave me a big alcohol infused kiss and hug and then asked if I could buy him a carton of 4X Gold as he could only buy a legal requirement of 18 cans for the day, whereas visitors such as myself could buy a carton of 30 cans. Most remote communities can only sell beer and in restricted amounts each day. In this case, 18 cans per person a day. You must show your ID when buying and blow in the breathalyser!

Sarah bought him the carton of beer and he then asked to drop him of at the drinking area where his wife was waiting which we happily did. The drinking area is a sea of beer cans shining in the stark sunlight. This is where people go to drink away from the town area, as many are unable to drink within their own homes. (Another whole debate there about how racist this law is – even considering that alcohol abuse is a big problem in remote communities, one does wonder how these laws can apply to one race of people and not others.) The police regularly patrol the area to ensure everyone is safe and do not hassle the drinkers too much if they are happy and peaceful. Borroloola Pub lost its alcohol licence a few years ago for breaching its conditions. It is now just a store and accommodation.

I had little variety store in Borroloola from 1990-1996 in a complex that had ‘Blackjack Takeaway’ owned by Ivan and Rosemary Weise and a butcher shop. This is now one large shop appropriately called ’Red Dirt’ a supermarket and takeaway.

We went for a drive out to the Bing Bong Port, which was built to ship out the lead and zinc being mined at the massive McArthur River Mine about 40 kms east of the cattle station where we lived. We checked out King Ash Bay, a remote fishing camp that is now a motley sprawl of kits homes, broken down caravans, fishing huts, a store, a club, a ranger station and millions of dollars’ worth of boats and four wheel drive cars.

After two day’s we left Borroloola at 8 am, having decided the night before to return to Katherine on the notorious Nathan River Road, 400kms of red dirt, rocks and corrugation in the Limmen National Park, passing now defunct cattle stations, crossing massive river systems in forty degree heat.

We anticipated the journey would take about four hours to reach my brother Daniel’s cattle station on the Roper Highway but a missed turn that saw us ending up back at Heartbreak Hotel and a flat tyre, turned the journey into a 14 our trip by the time we arrived back in Katherine.

But that is another story!