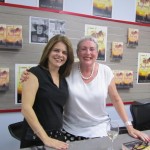 It is about 12 weeks since A Sunburnt Childhood hit the stands and it has been a whirlwind of interviews, book launches and bookshop signings and the development of this website.

The book reached # 3 in Dymocks Memoir in the second week and was Hachette Australia #1 for a couple of weeks. It reached #4 in Booktopia and has had reviews in a range of newspapers and magazines across Australia.  Who would have thought a story about an outback family in the remote NT would have sparked such interest and reactions!

Highlights have been a flight to Brisbane for the ‘Conversation with Richard Fidler’ two days after the book release followed by visits to all the big bookstores in Brisbane.  Dymocks, Angus and Robertson and a fabulous little independent store ‘The Avid Reader’ in the Valley.  Back to work for a week or so and then back to Sydney for more bookstore visits, a live interview with the Man with the Golden Voice – John Laws, and meeting the Hachette Australia team. It was so much fun when my daughter Megan flew down from Fraser Island to join me and we were able to go out to dinner with my sister Kate and niece Danielle.

I had a fabulous book launch at The Book Shop in the Darwin Mall with Territory playwright and winner of the Victorian Premiers Literary Award, my friend Mary Anne Butler hosting a Q&A session with myself. The owner of the store Anna Priore and her team are an amazing group of passionate people and the little store has a fabulous range of literature.

Over 180 people came to my hometown book launch at the Katherine Museum.  The manager, Simmone Croft set up a beautiful stage where the editor of the Katherine Times Lyndon Keane hosted a Q&A with me.  The audience were spell bound and loved the evening. The Museum sold about 80 books on the night. The Q&A form of doing a launch is much more interesting than standing in front of an audience talking about oneself.

Back to work in my position as the Local Authorities Officer for the Victoria Daly Regional Council, organising meetings in the five remote Indigenous  communities dotted across the 150,000 square kilometres that makes up the Council area before attending the Wordstorm Festival in Darwin.

Wordstorm is the biannual writers festival hosted by the NT Writers Centre in balmy tropical Darwin.  It was a fabulous event with a grange of workshops and I had the privilege of sharing a panel with well known Australian actress Magda Szubanski who has written the award winning memoir ‘Reckoning’ .  The panel titled ‘What will mum say’ also featured Indigenous award winning writer Marie Munkara and Alice Springs writer Linda Wells.  The evening in conversation with Magda Szubanski held in the beautiful Christ Church Cathedral in Darwin was booked out and this was followed the next with a Sunday brunch with Richard Glover, well known Australian journalist who has written the bitingly funny memoir ‘Fleshwounds.’  It was a great weekend of inspiration, fun and learning.

So my life has been totally crazy and I wont bore you for too long.  I have had so many beautiful messages, emails and phone calls from people all over Australia.  I sent a copy of the book to my mother in law Sally Coutts in Scotland and a matriarch aunt Ali Coutts and they both loved it.  I will be doing a Skype session with American friends whose Book Club are reading A Sunburnt Childhood.  Got to love all this new technology.  It can take you anywhere in the world at anytime.

My mother says she is enjoying being in the glow of the fame when she goes to Woolworths Shopping and all the locals tell her what a terrible driver she is – because of my stories in the book about her driving escapades!  Ha – we have had a lot of laughs.