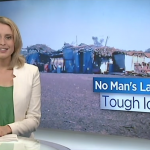 Kristy O’Brien did an amazing job of researching and digging out old footage, and capturing the story of ‘A Sunburnt Childhood’ in this 3-minute story featured on ABC News. There’s fantastic aerial footage of Killarney, the cattle muster, Bill Tapp on the station and the extended Tapp family kids at school. There are also lots of photos from the book.

“It reads like a bush fairy tale…” says Kristy.

I hope you enjoy Kristy’s report on ‘A Sunburnt Childhood’ as much as I did!