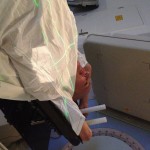 Getting my daily dose of Radiation.

How time fly’s when you are having fun.
I finished Chemotherapy eight weeks ago. Had a four week break before starting radiation treatment on the 29th July and I have just finished my fourth week out of six.

This involves travelling to Darwin every Monday morning and returning home on Friday. I am to have 30 zaps in total. This means having it five days a week for six weeks. My breast is tender, hot, itchy and red – my favourite colour!

I am staying at Barbara James House, a facility funded by the Government and managed by the YWCA for remote Cancer Patients requiring treatment in Darwin. The accommodation is all free which takes a huge stress off worrying about finances and paying for accommodation, particularly at this time of year which is peak tourist season and the average nightly cost of accommodation is $300+. It is spacious, cool and clean. Not sure how may patients they take but it never seems to be full.

Sadly my friend Lynda had to have a full mastectomy last week after a lumpectomy a few weeks before. She is in great spirits considering and I am looking forward to spending some time with her at Barbara James House next week.

As I am now only two weeks away from finishing all my cancer treatments I am feeling a little weary. I also drive the 650km round trip on my own each week and drive to the Cancer clinic every morning, about 30 minutes each way for 5 minutes in the radiation unit. Costing about $140 a week for fuel.

It has been a long seven months since the Doctor told me I had Breast Cancer. But it also seems just like yesterday that I thought my world had turned upside now and life would never be the same.

However LIFE has really just been the same with a bit of cancer thrown in to upset the apple cart.
In between treatments, travelling and appointments I seem to have been busy all the time. I had intended to finish writing my memoir during the six weeks in Darwin but the Darwin Festival has been on for the past two weeks.

I had the privilege of being asked to participate in a story telling event with six other Territorians hosted by Richard Fidler and ABC Radio. The event ‘This Territory Life’ was recorded and will be aired on ABC Radio. (I will post the link when it goes to air). We were required to talk for six minutes, free form with no notes etc. I spent a week writing my story, rehearsing, timing and reading it to my mirror 10 times. About 3 hours before the event I threw the notes in the bin and decided to focus on a point and let the story flow. I was the last speaker.

I watched and listened to the others, from the heart wrenching story from a father who spok of the day he was told his son was killed in Afghanistan, to the biologist who went croc hunting and a business woman growing up in a Chinese Bakery in Darwin. The storytellers were awesome and a little intimidating. My turn seem to come so fast and before I knew it, I was standing in front of a packed auditorium, with a spot light in my face. I recalled my parents meeting and going out to the cattle Station in 1961. Of going mustering with stockmen and going hunting with our Aboriginal Nannies, Daisy and Dora who regularly took us down the creek looking for goanna’s and bush potatoes and wild honey.
I relived the fun and laughter and the smell of bunkering down in Dora’s large lap to the smell of the smoky fire and goanna fat, and before I knew it……the bell was tinkling to say I had to wind up. The six minutes seemed like six seconds and I wanted to keep telling their stories and honouring those dear old souls who didn’t leave a headstone or a footprint on this earth but left a spirit of love and appreciation in my heart.

I spent a few nights with friends out under the stars at Festival Park, the hub of the Festival with outdoor dining and shows going on in The Lighthouse. I went to see Jess Rebiero and the Bone Collectors with my sister Caroline. Sat in Raintree Park and the Botanical Gardens and watched a variety of free entertainment and went to see some Art exhibitions. Also went to see the National Indigenous Telstra Awards at the NT Museum and Art Gallery. It is a gorgeous Museum that looks out over the Arafura Sea and has lots of lovely exhibitions and stories as well as a great café.

Well the light is now shining brightly at the end of the tunnel – wooohooooo = only two weeks to go and it is all over!
Six monthly checks for the next five years and a drug called Femara.
Hopefully the stars will align for me and I will be one of those 20 – 30 year survivors. I am counting on making it to at least to 90 years of age, fit and healthy with all my marbles!

Louis Armstrong sang
I see skies of blue, red roses too
and I think to myself —- what a wonderful world.