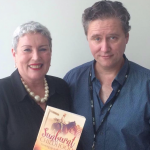 On Thursday 24 March, Toni joined Richard Fidler to talk about her amazing life and new book A Sunburnt Childhood. LISTEN NOW Toni Tapp Coutts: growing up in the red soil of the Territory.

Toni spent her childhood on Killarney Station, a massive cattle property 600kms southwest of Darwin. Her stepfather, Bill Tapp, built up a cattle empire there from scratch. There was only a shed on the property, with no running water. Toni and her family all slept in swags under the stars. They lived on salted beef, tinned fruit and bush tucker. Toni and her brothers and sisters were taken care of by two Aboriginal women, Daisy and Dora, who introduced them to Aboriginal culture. Eventually Bill Tapp succumbed to alcoholism, and Toni watched the great cattle empire fall into decline.