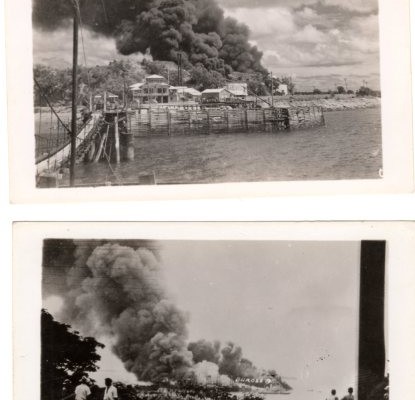 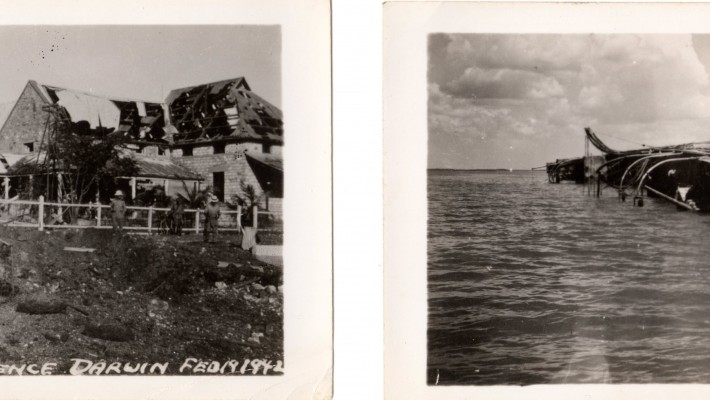 As I watch the Bombing of Darwin ceremonies in Darwin in reminds of when my younger brother Billy Tapp and I spent a year at school there in 1965 with my Aunty Pat and Uncle Rex Forscutt in  the seside suburb of Nightcliff .  We used to play at the beach most afternoons and regularly picked up large bullets – We would take them home and Uncle Rex would throw them into an ashtray on top of the fridge. One day we found a huge rusted bullet,  about a foot long, and took it to the Fire Station on the way home – they almost fell over in shock as they gently took the bullet from me (I was the eldest aged 9) and said never to pick up anything like that again, but to come and tell them where it was!  The many joys of being a kid in the 1960’s.

I have photos and postcards taken on the 19th February 1942 showing the ships, Zealandia and Neptuna on fire in Darwin Harbour, the bombed post office etc.  These are in the collection left to me by my grandmother Lilian Tindill, from my step grandfathers photos, George Tindill born in Palmerston Darwin about 1901.  He was member of the Vestey’s Football Team (Darwin) at the age of 20 in 1921. George was the Katherine Railway Station Master 1929 – 1965 and met the Queen when she came to Katherine. I have some wonderful photos but sadly most don’t have names.